A healthy start for an Afghan migrant baby 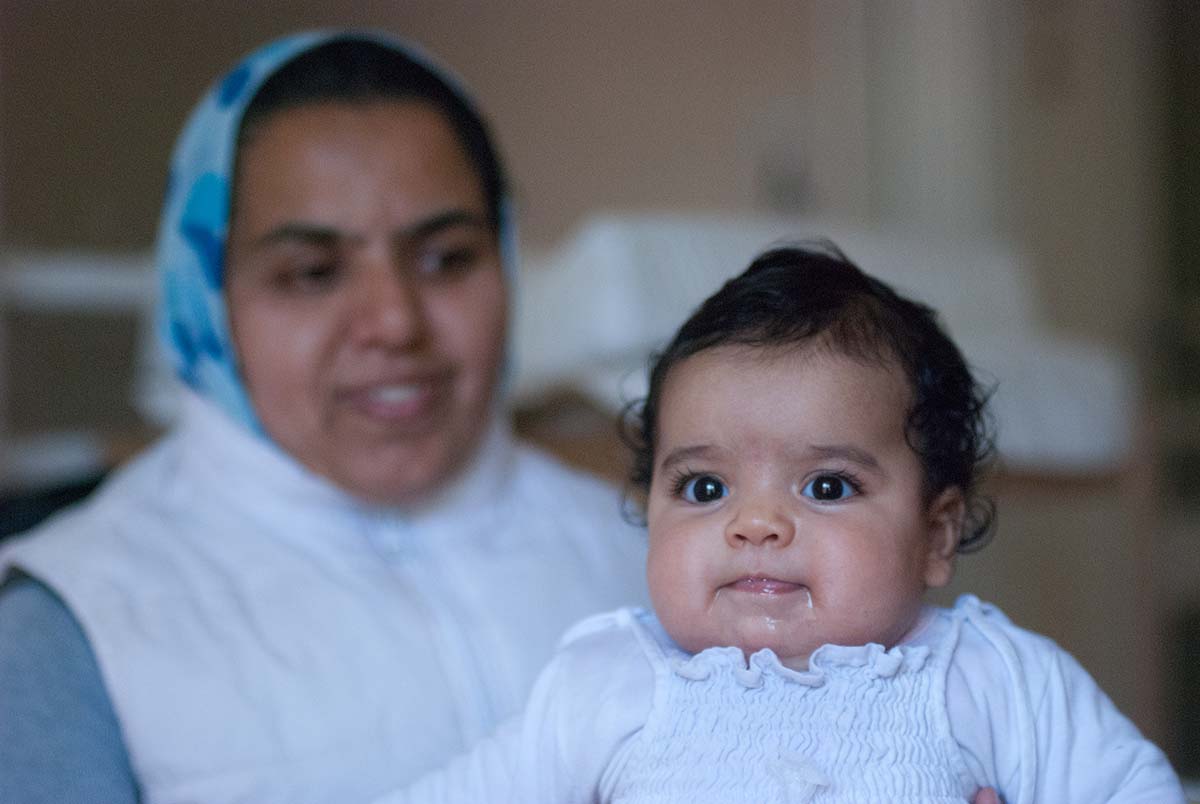 As an Afghan born and raised in a loving, large family in Iran, Fatimah always expected to become a mother one day. So when she found out she was pregnant, she was overjoyed. At the same time, she also felt the need to change her life and provide a better future for herself and her family. Iran hosts up to 2.5 million Afghans, the majority of whom are undocumented, just like Fatimah’s family, with minimal access to education and healthcare.

Together with her husband and his family, Fatimah crossed into Turkey and arrived at the makeshift tents of Greece’s infamous Moria camp. During her pregnancy, she endured bathing in cold water in the middle of winter and lining up for food that was simply insufficient; she got chickenpox and had to be hospitalised. When her due date approached, she was told she would get a C-section to avoid the strain of labour, and she felt scared.

But she says that a voice from nowhere, belonging to no one around, helped her through it. “You will be fine, your baby will be fine,” the loving voice whispered to her.

And so it was: in July 2019, she had a healthy baby boy, Emron. But then another hurdle came. In Afghanistan, most women, especially in rural areas, breastfeed their babies. But doctors on the island of Lesbos told Fatimah she could not breastfeed after a C-section and prescribed her son formula instead. Life in the camps was difficult, and so was getting formula because it was expensive and hard to prepare since she couldn’t always find a way to boil water to mix it. She did try to breastfeed him every now and then, but she now believed formula was necessary to feed him.

When her son turned two months old, the family moved to Athens to apply for asylum. Fatimah fed Emron a bigger bottle that he refused. She now had an infant who would not take formula and she wasn’t producing enough breastmilk to feed him.

She heard from an acquaintance about an organisation in central Athens that helps migrant women with their infants. That’s how she ended up for a breastfeeding consultation at AMURTEL that completely changed her experience. Fatimah managed to breastfeed her son exclusively for a few more months and continued to combine breastfeeding and solids until he turned two years old. Without AMURTEL, she says, it would have been much harder to stand up for herself and overcome the pressure.

I met Fatimah at the AMURTEL offices in central Athens on a hot summer day, and spoke to her with the help of one of the organisation’s Farsi interpreters. Fatimah was incredibly proud of herself and how she managed to raise a healthy toddler. She dreams of giving Emron an education that he would have never received in Afghanistan or Iran, where her family was never fully integrated.

“This trip was so difficult for me and my family. But I am sure it was the best decision for my son’s future. Because if he were in Afghanistan, we would be scared if he goes to school. We would ask, ‘Will he come back or not?’” Fatimah told me.

I visited the AMURTEL offices because I found their work supporting migrant women and infants inspiring. Figures show that only one out of four migrant women breastfeeds exclusively for six months – well below the world average of 44%. Yet breastfeeding is the best source of nutrition for infants, especially in emergencies, as it protects infants’ survival, health and development – and can be an essential way for mothers to feel in charge of their children’s health, as Fatimah told me.

Reporting on AMURTEL’s work opened my eyes to the importance of supporting women in their pregnancy and early days as mothers to make them feel empowered and capable of supporting their children’s lives.

As the conflict in Afghanistan worsens, I can’t stop thinking of Fatimah and how many other women and infants will be in a situation similar to hers. Watching the news can lead us to think there is only room for despair, but that’s not my experience working on the ground in places where tragedy happens. There are usually people and organisations that help around the clock to make sure others get the help they need, without treating them as victims that need to be saved. The worse the situation gets on the ground, the more we will need these organisations, both in Afghanistan and in countries that are welcoming those who are fleeing. To me, it’s especially important that humans facing tragedy feel that their agency, their will and their dignity are respected, instead of being infantilised and told they don’t know better. That’s why I admire AMURTEL’s work so much. If Fatimah wants to breastfeed her baby, she has the right to want that.

If you’d like to learn more about AMURTEL, here is a link to the story I wrote for InfoMigrants. It contains more information on how AMURTEL operates and why more priority should be given to breastfeeding in emergency contexts. I would love to hear your thoughts about the work they do. Do you think that focusing on mothers and infants is too narrow? Or is it a great start? As usual, you can write a comment below this story.

If you’ve never read My Sweet Dumb Brain newsletter, I highly suggest you do. Katie Hawkins-Gaar writes about “the ups and downs of life”, has shared her story about postpartum psychosis and written extensively about grief and becoming a widow. But one of her latest newsletters hit close to home. In A little bit of everything, Hawkins-Gaar tackles some of the research supporting the importance of fewer toys for children, and connects that to the amount of choice and distraction we adults get in our everyday digital lives. It’s definitely worth a read, which you can do for free, but I highly recommend paying to support her great work!

The science of meltdowns that I wrote about recently reminded me of Baby Talk, an episode of NPR’s Hidden Brain that I listened to a couple of years ago. It offers a fascinating insight into the many ways that children communicate that sound just like cute gobbleydegook to us adults. Researchers however have found that babbling can be predicted and taught too. The episode starts off with the sound of two twins babbling to each other that you can’t miss! Oh, and it also includes the research that deciphers the rhythm of a meltdown.

It’s heartbreaking to watch this short video about two Syrian children and the toll that the war has had on their lives. BBC correspondent Caroline Hawley does what few journalists do: she goes back to these children over time to find out how they’re doing, and follows their lives as they grow up, with the war’s scars still very evident on their bodies. With the conflict in Afghanistan worsening, this video hits a particularly painful spot.

Sirio is eight years old. He can’t really speak or feed himself and he breathes thanks to a tracheostomy, but his playfulness and enthusiasm for life are what have transformed him into an influencer. He has spastic tetraplegia, a condition he got just weeks after being born premature and later surviving sudden infant death syndrome (SIDS). Sirio was in coma for a month and his parents were told he would stay in a vegetative state for his whole life. But his parents fought back, brought him home after a year in hospital and got the support they needed to help him with his progress. His mother Valentina shares Sirio’s life daily on social networks (in Italian), using irony and defying the paternalistic, pitiful approach that many people have towards her child. “Damned gravity,” says one tweet. “Why do people look at me?” asks another. “How much would I like to know how to transform those border looks, those barbed wire looks, into smile looks, round dance looks, relief looks, complicity looks.” The Twitter account is called “Sirio and the tetrabonds,”, a term his mother came up with by putting together the words tetraplegia and vagabond, in honour of Sirio’s adventurous spirit.

📸 Photo Credits and alt-text: AMURTEL, A woman and her baby at the AMURTEL organization in Greece