Menu
Become a member now
Wanting to raise a feminist son has forced me to confront some of my own uncomfortable biases. But a world without gender benefits boys just as much as girls.

From boys to feminists: raising a child in a gender-free environment 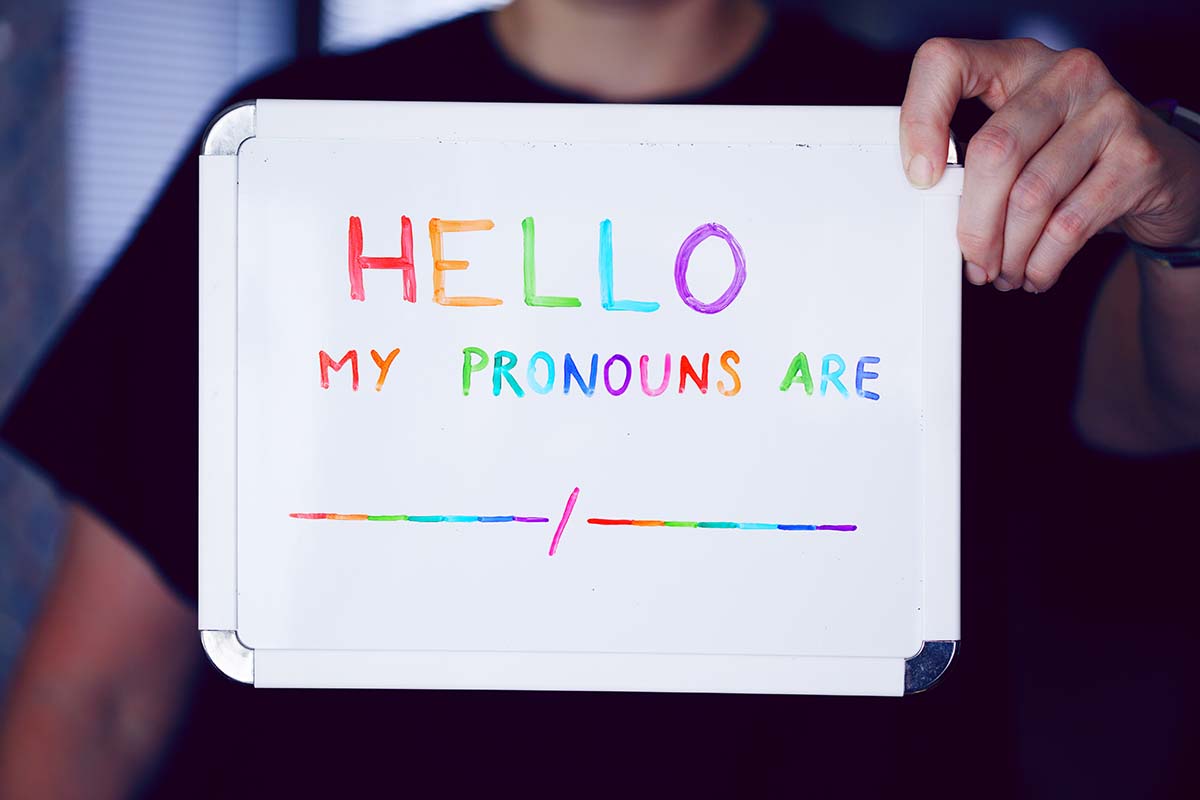 It just slipped out of my mouth as I was recording an audio message for my friend Claudia. I was speaking about my son Lorenzo, eight months old at the time. I had probably said that as a reaction to him pulling my hair or biting me while I was distractedly speaking on the phone – most likely in an effort to get my attention.

Claudia’s reply felt like being doused with a bucket of cold water: “How can you say he’s violent! He’s just a clumsy baby!”

I consider myself feminist, liking Nigerian writer Chimamanda Ngozi Adichie’s definition of the term: “a person who believes in the social, political and economic equality of the sexes”. As such, I’ve become aware of language being used in ways that stereotype by gender. But as language lags behind progressive ideas, I’ve also written before about my struggle with masculine pronouns.

Yet there I was, assuming that my eight-month-old child was being violent, just because he’s a boy.

Violence, aggressiveness, strength and competitiveness are traits we tend to associate with masculinity, just as much as sensitivity, kindness, compassion and warmth are considered female characteristics. But we’re not born with any one of these qualities.

The myth of the gendered brain

For centuries, scientists tried to find some objective proof that women were less intelligent than men and were more inclined towards care and emotions than competition, power or physical activity. Many studies attempted to show that men have bigger brains than women, trying to justify the status quo with biological and neurological arguments.

But science has since moved forward. There are now several scholars who dedicate themselves to uncovering the gender bias in neuroscience itself.

Daphna Joel is one of them. She is a professor of psychology and neuroscience at Tel Aviv University, and the author of Gender Mosaic: Beyond the Myth of the Male and Female Brain.

Joel writes*: “Although sex does affect the brain, there are no ‘true’ male and female brains out there to discover. The true nature of the brain is that its form is highly variable – a variability created by the interaction of multiple factors, including sex, in the fetus and throughout a person’s life.”
(*This quote is from Gender Mosaic: Beyond the Myth of the Male and Female Brain.)

In other words, babies don’t have male or female brains at birth. The differences that emerge later in life are more significant within sexes than between sexes, meaning two random girls will be more different from each other in behaviour than the average girl and average boy.

The trap of toxic masculinity

When I found out that I was pregnant with a boy, part of me relaxed. I thought that I wasn’t ready to deal with what my colleague Lynn Berger refers to as the “princess phase”* or with being asked to help put on makeup**.
(*My colleague Lynn Berger wrote an interesting essay about having a daughter and dealing with the ‘princess phase’.
Read Lynn’s article here.)
(**Of course, my fears speak of my own stereotypes and views of femininity, since I was never interested in makeup as a girl.)

But raising a boy brought up a few challenges too.

First of all, I was weirded out by the idea of a penis forming inside me. How could my body be capable of creating a penis?* But when I stopped to reflect, I realised that the only valid question was: why was I so fixated on the kind of genitalia my child was going to have? Did it really matter?
(*To be fair, the idea of a whole body and human being growing inside myself, regardless of its genitalia, was quite trippy and magical in itself.)

If I want to raise a feminist child, I have to make sure they  are not constrained by an external idea of what they should be doing because of what society expects from someone with their genitalia*.
(*Boy vs girl is in itself a simplification of the underlying issues of sex and gender.
This piece by Othering correspondent OluTimehin Adegbeye offers an interesting insight into the concept of womanhood)

Since Lorenzo has a penis, he is more likely to fall into what educator and activist Tony Porter calls a “man box”*, another way of saying toxic masculinity**. There’s an increased likelihood he’ll perceive himself as more powerful than women and be less capable of expressing his emotions.
(*The man box has in it all the ingredients of how we define what it means to be a man, says Tony Porter in his Ted Talk. These include: don’t cry or openly show your emotions, don’t show weakness or fear, don’t be ‘like a woman’.
Watch Tony Porter’s Ted Talk.)
(**David Brockway of Great Men Initiative defines toxic masculinity as a set of negative behaviours that men think they have to follow to be ‘proper men’.
Watch Brockway speak about the damage caused by toxic masculinity.)

But how could a sweet, clumsy boy turn into an angry, possibly violent man incapable of expressing his emotions?

I cannot stop thinking about my own reference to his “violence” and how much language plays a role.
(There has been a lot of research regarding the connection between language and gender stereotypes, and there is a sense that using gender-neutral language helps reduce stereotypes. Research is still developing and is far from perfect, but there are some interesting case studies.
Here is a good review of the literature.)

“Language is the repository of our prejudices, our beliefs, our assumptions,” writes Adichie*, who adds that questioning language is fundamental to making sure our children are feminists too. “Decide for yourself the things you will not say to your child. Because what you say to your child matters. It teaches her what she should value.”
(*Nigerian writer Adichie published an essay titled Dear Ijeawele, which was born as a Facebook post and later turned into a book. It is a letter to a friend who has a baby girl on how to raise her baby as a feminist.)

I was in a bookshop in Buenos Aires recently, when Lorenzo, holding onto my arm, started smiling at a group of women. Their reaction was immediate: “What a flirt!” “He will break a few hearts!”

I didn’t have an immediate response. But I was thinking: why do we refer to a baby as a flirt instead of simply as a smiling boy? Why do we say that he will break hearts instead of saying he’ll have a lot of friends?

And more importantly, would those women have said the same thing if they had perceived Lorenzo as a girl?

Putting my son in a box marked ‘boy’

Whenever I bring Lorenzo to the playground, it’s usually not long before the question “is it a boy or a girl?”* is asked. But why is asking about a child’s sex such an obsession for us?
(*Interestingly, I have noticed that when Lorenzo wears red, more people tend to simply assume he is a girl. Is it because we associate red with pink, which has become the all-encompassing colour for girls, as Yoon’s pictures show?)

In a two-part BBC documentary, Javid Abdelmoneim, a physician and TV presenter, conducts an experiment to see whether he can free a class of seven-year-olds from gender. As part of the experiment, he swaps babies’ clothes and lets adults interact with them. Perhaps unsurprisingly, the adults give more pink, cuddly toys to those they perceive as girls and more puzzle games and robots to those they perceive as boys.

“That really astounded me because I really thought I was somebody who had an open mind,” said one of the adults in the experiment.

Judi Mesman, professor of the interdisciplinary study of societal challenges at Leiden University in the Netherlands, says: “Gender norms are far more rigid for boys than they are for girls. A boy in a dress or playing with dolls is way more likely to get negative reactions than a girl in cargo pants playing with cars. This continues into adulthood. And boys (and girls) quickly pick up on this double standard.”

In my attempt to steer Lorenzo away from gender norms, I accepted all sorts of hand-me-down clothes – including a long-sleeved onesie with flowers that was explicitly part of a girls’ collection. But it took me some time to dress Lorenzo in it. I was somewhat resistant, maybe because I was instinctively trying to protect him from strange comments. I was boxing him in myself.

My subconscious attempt to shield Lorenzo from societal pressures was probably not a good strategy anyway. A boy who likes dancing and wearing skirts will most likely face some sort of questioning at some point.

Joel says it’s important to expose children to these gendered stereotypes: “If you tell them there are no differences, [children] will discover that this is not true. You don’t want to present a reality that is not true. You want to problematise this reality and help kids develop a critical eye regarding their environment.”

This also includes highlighting boys’ privilege. For example, that they’re more likely to be taken seriously and have more opportunities if they want to play football or pursue a career in computer science.

As Joel puts it: “If you get a good hand in poker, you don’t think that you are such a great player, you think you got a great hand and that’s that.”

But Joel is positive we are taking the right steps towards a gender-free world. And while big change is necessary from the top down, we can all make a difference by questioning our own biases.

My friend Claudia caught me when I called Lorenzo violent. I hope that I can surround Lorenzo with a village of aunties, and uncles*, who can help him regularly question his stereotypes – just as they can help me.
(*Adichie refers to this in her essay Dear Ijeawele.)

For now, my husband and I are taking some steps towards a gender-free environment. We divide chores equally and both spend time at home with Lorenzo.

But gender free also looks like all of us dancing together. It looks like a hug if there is sadness, and a lot of open communication. I hope it will look more pink and blue and green – maybe even glittery – as Lorenzo grows up and has the freedom to figure out who he wants to be.