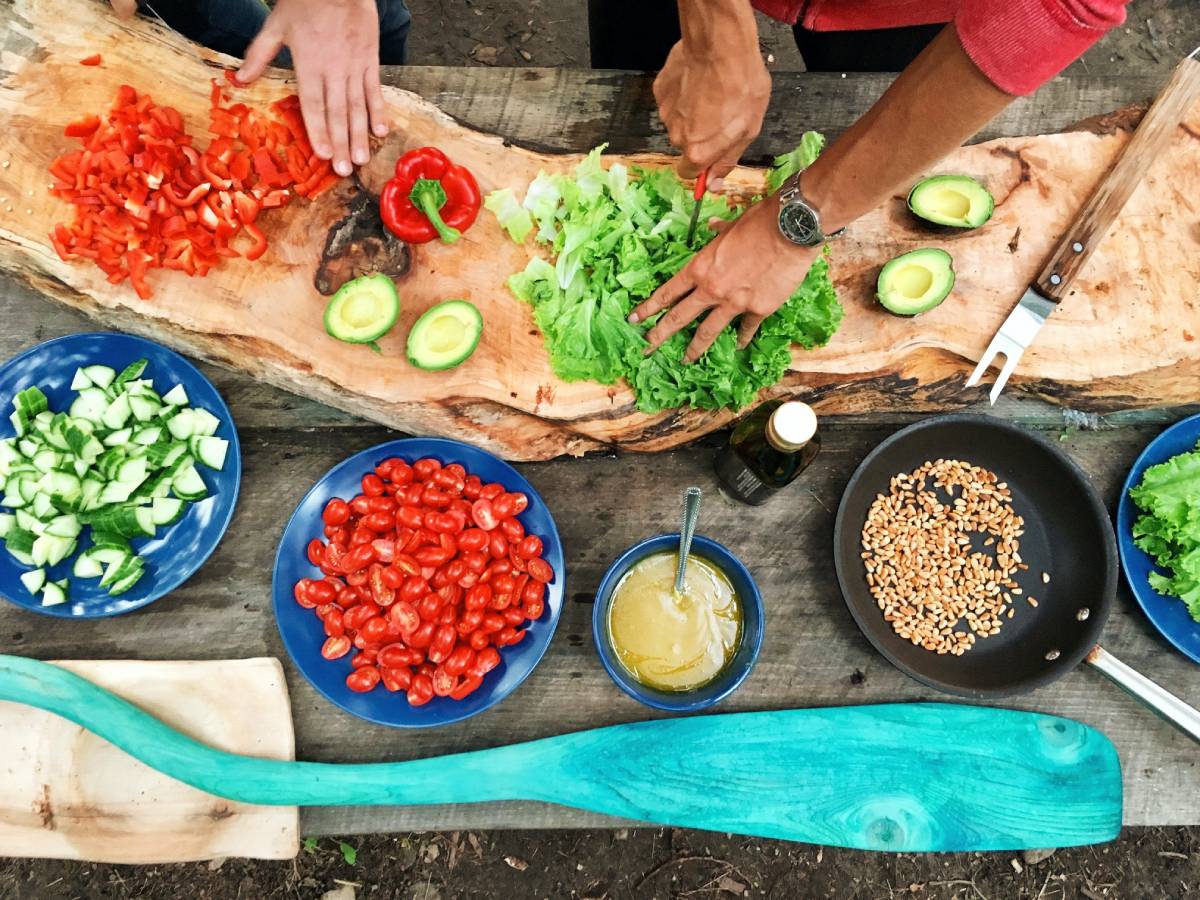 She is one of the women I met in Lesbos, the Greek island that became a main transit destination for migrants trying to reach Europe via Turkey.

Born in Syria, Manal has three children, the youngest of whom, Nina, was born in the refugee camp in Lesbos. Her first boy was born in Syria and her second in Turkey, during the period they spent there after escaping from Aleppo following the brutal Syrian civil war. She speaks Arabic and Turkish, as well as some English picked up during her years in Lesbos.

I met her through one of the midwives of MAM Beyond Borders, the association that supports pregnant women and infants in the Mavrovouni camp, which is run by the Greek authorities with financial support from the European Union.

During the week I spent there, as part of a reporting trip I did thanks to an ICFJ fellowship on nutrition, Manal brought the camp to life for me. And she did so in a remarkable way — through her cooking.

On first sight, Manal’s living quarters are not set up to cook at all. She lives with her family in one of the shipping containers that’s been turned into accommodation — there are no kitchens or sinks inside, but Manal, like many others, has set up a small electric stove to cook some delicacies.

Food in the camp is quite a sensitive issue. People line up daily to receive cooked rice, chicken and some pitta bread, which most people in the camp rightly complain about, as this Instagram account shows.

But every time I approached Manal’s container, she offered sugary tea and some delicacy she had prepared. Once I got invited to a proper lunch, which included molokhia (or mulukhiyah), a bitter green she sauteed without mixing it with meat for us vegetarians. There was rice, a salad, and two meat dishes too.

Something about her cooking kept alive her spark and made her purposeful. She would knock on a neighbour’s container and invite them to come eat, or send them back to their container with a dish full of happiness. International volunteers from the camp, and other foreigners like me, would come over and be introduced to Syrian food accompanied by an Arabic class.

Her cooking set her apart from the other women in the camp. Most women I spoke to told me they had cravings for food from back home. These could not be satisfied in the camp, where food is not a priority by the camp authorities — not even for pregnant women and infants, as I wrote in my piece. And as I found out, cooking is so much more than just a way of preparing food to keep us alive. It’s part of our very identity and history.

How you can help Manal

U.S. child trauma psychologist Chandra Ghosh Ippen has worked a lot with migrant communities and understands better than anyone the importance of cooking.

As she explained, if parents are depressed in a refugee camp, one way to support them is by helping them feel confident, competent, capable and connected. And cooking can play a key role not only in feeling empowered but also in connecting with the culture of origin. “Anything you could preserve… will help,” Ghosh Ippen said.

In Manal’s case, there was always someone knocking at her door leaving fresh molokhia leaves (a neighbour complained that they always turned out slimy when she tried to cook them) or chicken to be turned into a feast.

After I left Lesbos, Manal and I stayed in touch. She was feeling down; she wanted to learn English and study; she was worried about raising her children in the camp, and that she would never receive asylum. After four rejections, the family had had to reapply for asylum paying the steep fee of 100 euro per family member — a fee that rights organisations consider opposed to the basic right to request asylum. Even in those moments, she shared pictures of the food she had cooked: a chicken stew, the unmissable rice, tomato sauce for pasta.

But then the good news came via WhatsApp: their asylum application was accepted, and Manal and her family are hoping to make it to Germany, where they have family.

But they need money to apply for their Greek passports and for the trip, and that’s where you can help. I have set up this crowdfunding page. I am hoping to gather some money to help her start a new life, somewhere safe. Every little bit will help.

By the way, if you are interested in hearing more about how migration can affect early childhood, connect on July 18 for the webinar I will be moderating for the Dart Center. Sign-up details are coming, but you can read more about it here.

I really enjoyed this short essay about body image during pregnancy, and a mother’s honest account of how her children helped her see herself differently. “My 10-year-old son smiled every time his eyes landed on my belly. Contemplating its sturdy construction, he’d applaud how well built of a home it was for his brother-to-be,” writes U.S. legal advocate for domestic violence survivors Jennie Rabinowitz. “My daughter would head straight to my belly after school, showering it with kisses before contentedly resting her chin atop my abdomen.” After giving birth, Rabinowitz felt estranged from her body, but again, it was her kids that helped her give perspective: “as the mother of a tween girl, I didn’t want to pass on my warped perspective.”

Abduweli Ayup is a Uyghur linguist who was trying to stop the Chinese government from replacing Uyghur with Mandarin, and went as far as setting up kindergartens and schools teaching Uyghur to children in Xinjiang. Then, in 2013, he was arrested. In this episode of Kerning Cultures, we hear from Ayup in Istanbul, where he lived after managing to escape from China. He reveals how he doesn’t talk to his own children about what happened to avoid them perpetuating ethnic hatred. A great podcast to think about the importance of native languages and what happens when they come under attack politically.

“What if I were to tell you that a change of peek-a-boo could change the world?“ This is how Molly Wright, a student from Queensland, Australia, starts off her TED talk — becoming, at age seven, one of the youngest TED speakers ever. The talk, commissioned by the Minderoo Foundation and UNICEF, explains the very basics of brain science and how important the first five years of life are for a child’s brain development. Wright refers to what is known as ”serve and return“, the basic interaction between child and carer that shapes their brain. She concludes by reminding the audience that playing is much more than just a game for children. Thanks to Yara, a member of The First 1,000 Days community, for sharing the video. I saw that the child’s family was criticised for putting her in the spotlight, but I must say that having a child advocating for the importance of the early years is quite effective.

Through the Global Breastfeeding Twitter account, I discovered the coolest passport ever: Gabon’s non-biometric passport — unfortunately about to be phased out — has the image of a breastfeeding woman on its cover page. Seriously! This is because the country’s seal is a mother nursing her child, which “represents the Republic, the Gabonese State that nourishes its children, protects them, cares for them, educates them and watches over their happiness. The child represents each of us, members of a family, the Gabonese nation to whom we owe respect, obedience and love.” Beyond the maternalistic concept, I loved the idea of a country seal showing a breastfeeding woman and an infant, with a boob clearly visible.

📣 The First 1,000 Days is edited by community member and friend, Shaun Lavelle, who wishes everyone a somewhat belated happy Pride month!