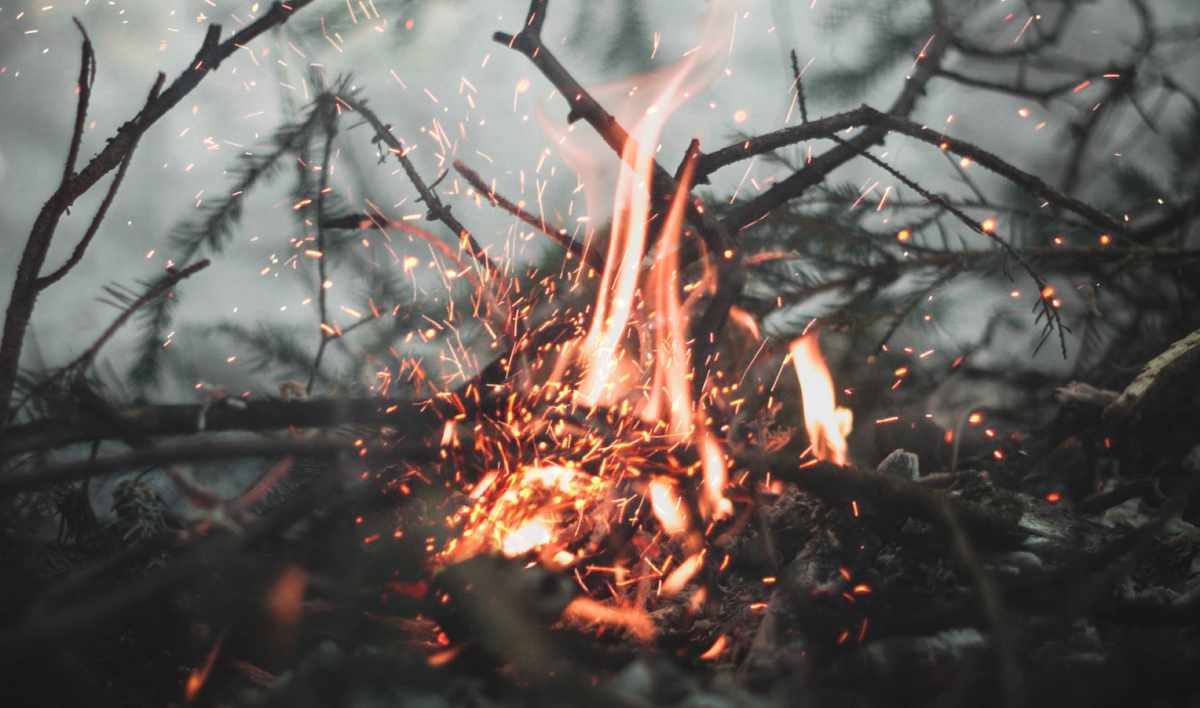 One afternoon last year, I fled my home with my family as the hill above my home burned. I’d had time to pack only some laptops and hard discs (don’t ask me why), passports and a change of clothes for my son, Lorenzo, who was two at the time.

That was the first thing I thought of when I woke up last night to the rancid feeling of smoke in my throat. I heard Nacho, my husband, walking around the house shutting windows, the wind blustering outside.

As I slowly realised what was happening, I got up and went out onto the balcony. The floor was full of small black dots of ash blown from the latest wildfire, in the mountain some 30 km north of Athens where we live.

The sky was Blade Runner red. It looked as if the sun would not rise again.

Yesterday afternoon, on the beach, I had spotted a column of smoke snaking its way through a perfectly blue sky. When I first arrived in GreeceI had thought these were strange cloud patterns. But even in my short time in this country, such sights have become common enough for me to recognise quickly that they mean one thing — forest fires.

As our house faces the Aegean Sea, we know there are wildfires when we spot the Canadair planes flying low above the sea to pick up water to drop on fires. Even Lorenzo, my three-year-old son, knows how to spot the yellow-and-red planes and can call them by their name.

But there are days when the fires get closer. The air becomes unbreathable, the ashes are scattered all over our balcony and house. Last year, firefighters came to evacuate us as the hill above our house burned.

We packed quickly, hoping we could get back to our house soon. We parked our car close to the sea, out of the danger zone, and could watch from afar as two Canadair regularly dropped water on the burning trees that were only a kilometre uphill from us. Thankfully, the fire was put out in a couple of hours and we eventually went back home.

A three-year-old’s unhealthy obsession with firefighters

Wildfires are not something new in my life. Growing up off the slopes of Mt Vesuvius, in southern Italy, close to the world-famous excavations of Pompeii, fires were common — often as a result of arson. Later, as a journalist, I even reported on the allegations of the local mafia’s involvement in them.

But things are different now. Friends in the UK and France are facing record heat temperatures weeks after a heat wave hit other friends in Delhi, while wildfires are raging in most of southern Europe. It is a result of the rising temperatures our climate emergency is bringing — which we understand increasingly better and are at the same time powerlessly incapable of facing head-on.

Even if Greece has been spared by record temperatures so far this year, the longer-term temperature rises and hot and dry climate over the last few weeks have increased the overall risk of forest fires.

I know that children love firefighters, but I do worry about Lorenzo’s seeming obsession with them. When we were evacuated last year, we were trying to explain to Lorenzo what was happening, and how important the firefighters were.

When he now plays with what may have seemed as an innocent game, pretending he is quelling fires around him with imaginary hoses, I do wonder how much my own climate anxiety is playing out in his games.

Those most affected by rising temperatures

“I don’t want to be scared of weather,” a 17-year-old girl, Isabelle, told Vaishnavi Kumbala, a Louisiana high schooler who talked to peers who have been displaced by hurricanes for a great article in Teen Vogue.

But how can we, and our children, not be scared of weather and nature around us if we’ve already tipped the balance? This is even more pressing an issue considering that rising temperatures most impact babies, toddlers, pregnant women (and the elderly). And that heat and air pollution are linked to adverse pregnancy outcomes. This UNICEF report, for example, shows that an estimated 820 million children — over one-third of children globally — are already exposed to heatwaves. And of course the Global South is affecting more than the Global North, and communities living in poverty bear the brunt of the climate emergency.

It is understandable then that climate change can cause distress, anger and other negative emotions (or climate anxiety), and that these feelings may be even stronger for children and young people worldwide, as a survey of thousands of 16- to 25-year-old showed last year.

How to fight climate anxiety

When it comes to climate anxiety, one of the most useful and practical things I have read lately is this piece by U.S. journalist Allison Lichter in Matriarchy Report, the newsletter she co-writes with journalist Lane Anderson.

Allison writes about how she deals with climate anxiety. She refers to the work of Leslie Davenport, a psychotherapist and author of “All the Feelings Under the Sun: How to Deal With Climate Change,” which is written for middle-school aged kids and includes practical exercises to process our anxiety after learning the real and hard truths about the climate emergency.

Allison also refers to another important and practical tool: the Venn Diagram of Climate Action, an idea from climate activist and marine biologist Dr. Ayana Elizabeth Johnson and the How to Save a Planet podcast crew. This tool helps people understand what they should do vis-a-vis climate change based on what brings you joy, what you are good at, and what work needs to be done.

Based on the Venn Diagram, I should be advocating for putting an early childhood lens to climate advocacy in this newsletter and beyond, and possibly while sitting at the beach.

As I finish writing this, hours after the fire, the smell of smoke is permeating through my house, the horizon is clouded over, and the sky is beige.

You may have noticed that I rarely talk about our climate emergency. I find that I have little to contribute to the conversation, usually, and that there are better sources for that. For example, I would highly suggest reading through last year’s edition of Early Childhood Matters, the annual journal of the Bernard van Leer Foundation, which focuses on the intersection between early childhood and climate change.

And this newsletter does not aim to increase our climate anxiety (though I must say that it is hard), but it is a reminder of the kind of conversations we are not having, of the priorities that we could set and we are not, and how central children need to be in all our policy-making.

I would love to hear from you about how you cope with climate anxiety, especially if you have children in your life. Any tips or ideas are welcome. You can leave a message below this piece.

This is a great article by Kago Kgosietsile about a national campaign to stop mother-to-child transmission of HIV in Botswana, a country that once had the highest HIV prevalence rate in the world. The programme, which was launched in 1999, helped mothers and their newborn babies get immediate access to antiretroviral therapy if they were HIV positive. The good news is that more than two decades on, Botswana is on its way to becoming the first African country to eliminate mother-to-child transmissions, even if it still has a high adult HIV prevalence rate of 20% – with most of the cases among women.

I recommend this short report on the importance of children’s bilingual books on KQED, an NPR-member radio station in San Francisco, California, where a quarter of the population speaks Spanish as a first language and bilingual books can help bridge gaps between two generations. The report refers to various English/Spanish books that talk about the struggles of migrants, while at the same time turning Latinx characters into agents of change. “Are we going to the land that we see on TV? Will we fly in a plane? Will there be more toys for me? Her dad forced a smile and put on a brave face. It won’t be so easy to get to that place,” comes the quote from “Para Todos/For All,” by Alejandra Domenzain, which tells the story of a young girl named Flor and her father, who are forced to flee their homeland. And if you’d like a reminder about why it is important to diversify what our children read, I wrote about it a few weeks ago here.

The Worst Person in the World, directed by Danish-Norwegian Joachim Trier, does a great job at telling the story of Julie, a young woman who starts to follow her impulses after a childhood of being the best in school and excelling at being told what to do — a childhood story I myself can relate to. Over several years, Julie goes through several relationships, faces uncertainty regarding her passion in life and tries to come to terms with her family of origin. It is a story about being a woman and navigating the world between being told who you are and who you should be (a mother, a lover, a successful career woman) and trying to figure it out for yourself despite it all.

With summer here and vacations in the air, this short edition of The Double Shift newsletter is just what I had to read for inspiration. “We’ve been socially conditioned into an unspoken platonic ideal that taking time away means we must do so much prepping that no one even notices we’re gone. That’s our penitence for having multiple priorities, the burden we carry for not being able to literally be in more than one place at a time,” writes U.S. journalist Katherine Goldstein. I really love her take on motherhood: “We are interested in systemic solutions to personal problems, because there’s nothing wrong with us moms. What is broken is our society,” she wrote recently. You can sign up for Katherine’s weekly newsletter and consider joining The Double Shift member community, which she calls a social change laboratory for moms.