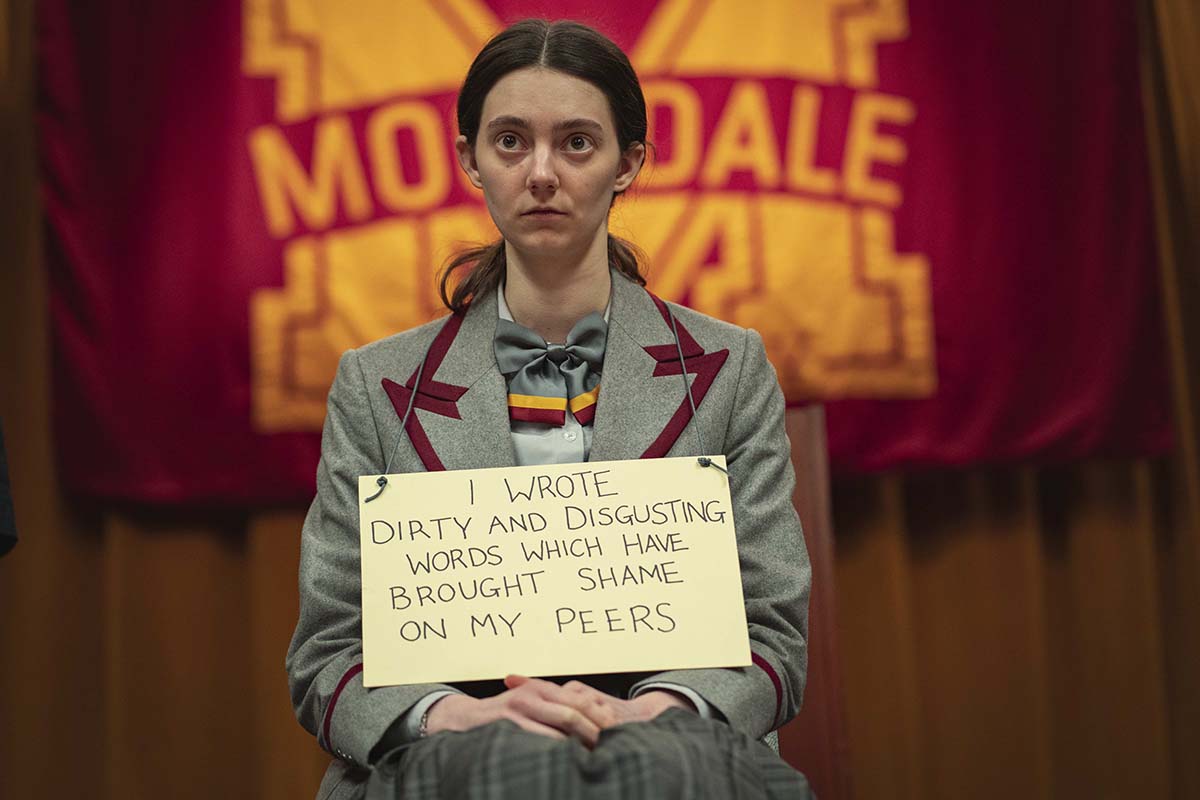 This week’s post is long, so I’m skipping recommendations. They’ll be back next week!

The image is a still of a scene from the series Sex Education. Source: Netflix

I had different plans for this week’s newsletter but I got a bad cold and spent a lot of time in bed sleeping and recovering.

The upside is that I finally caught up with the third season of Sex Education, the Netflix series that normalises the idea of sexuality among high school students. In the show, Otis, an awkward teenager and the son of a sex therapist, starts giving his peers sex advice for money and the school eventually becomes known as the Sex School as more teenagers become open about their sexuality.

After watching the first two seasons last year, I wrote a piece about what I wished I had learnt as a teenager, and I want to share those reflections again – with a few updates from the latest themes brought up by the third season.

If you’re new to this newsletter and are surprised to see me writing about sexuality, there’s a reason behind it. I believe that we can’t talk about children without considering their birth or gestation, and how their conception came about, as I wrote about in the principles behind this newsletter. Sex education can play a big role in how we deal with our sexuality and reproduction, so this is why this is relevant.

And now, on to the big lessons.

Spoiler alert: this article contains some details about the series.

Not only does Otis give sex advice for money, his mother also steps in when there is a chlamydia outbreak, and several other characters take active roles in counselling their peers, making them feel accepted and in the know. The counselling is not just about sex, but also about relationships. In the third season, for example, Adam seeks advice from his boyfriend’s ex because he’s the only other gay guy he knows at school. This abundance of exchanges conveys the first important lesson I took from the series: it is perfectly OK to ask for sex (and relationship) advice. We ask each other for advice on almost everything else in life – so why not about sex too?

2. Universal rules or techniques may not take you very far

In one episode, Otis studies fingering techniques to experiment with his girlfriend. He becomes so obsessed with the technique that he starts to do it almost robotically – much to the girl’s dissatisfaction. When he seeks advice from a peer, Otis learns that the key to satisfying your partner is asking and figuring out what works for them. Lesson two: there’s no one way to “do it”. It depends on the person we do it with, and not all of us like the same thing. So while doing your research may be quite useful, don’t take your findings as definitive answers.

Otis’s mother is sex and relationship therapist Jean Milburn, who gives some great sex advice in the first episode of the second season when there’s an alleged outbreak of chlamydia. She calls them the three Ts: trust, talking and truth. Trust, talking and truth, she says, are essential for teenagers to “free themselves of the unwarranted stigma” attached to sexuality and contracting a sexually transmitted disease. What she means is that it is necessary to create an environment where adolescents can get access to real information (truth), while being able to discuss that information (talk) in a place they feel safe in (trust).

5. Humour is great in bed

Otis’s best friend Eric is incredibly irreverent. When Otis is horrified because he had a wet dream, Eric laughs if off and helps him feel OK again. His positive and open attitude is a great reminder that humour is a great element to add to sex, and that having a laugh can take away from some of the worries in bed. Think of the awkward moment when you queef*: a quick joke about it, or a reference to this woman who wouldn’t stop laughing when she heard the word queef, may be a great way to move on and keep having fun.
(*Queefs are also known as vaginal farts. They have nothing to do with passing gas though and are odourless. They create a fart-like sound that may come from the vagina during intercourse if air got trapped in the vaginal canal.)

6. There’s nothing about sex you can’t discuss in a relationship

7. Sexual harassment can have consequences

In one of my favourite moments in the show, six female characters who have nothing in common are stuck in the same room and given an assignment: they need to figure out what they have in common as women. The only thing that eventually makes them bond is the realisation that they have all been sexually harassed at some point in their lives. In another episode, Maeve convinces her friend Aimee to go to the police after a guy ejaculates on her on a bus ride and accompanies her through the process. But the episode leaves Aimee traumatised. In the third season, she sees she can’t be intimate with her boyfriend anymore and starts therapy to get support.

We all have all kinds of conscious and unconscious norms and ideas ingrained in our head about what sex should be like. But, as you progress into the series, you realise just how many forms of sexuality there really are. The third season introduces two non-binary characters, Cal and Layla, their choice to use the non-binary pronouns “they/them” and their struggles with changing rooms, chest-binding and queer relationships. Of course the show misses out on several other perspectives, but it tries to normalise different types of desire – as well as its absence. In the second season there is a character who is not interested in having sex at all – and that is normal too, as an estimated 1% of the population identifies as asexual.

9. Abortion should be an option for everyone

When Maeve finds out she is pregnant, there’s no doubt in her mind: she goes to a clinic to get an abortion. At the clinic, she’s asked routine questions and her decision is supported. Of course, the series is set in the UK, where abortion is allowed until 24 weeks of pregnancy. Unfortunately, abortion is not an option for most women around the world – either because it’s legally restricted or hugely stigmatised or both. We have to keep fighting for this right and normalise it.

For Jean Milburn, sex education is not just about teaching how to avoid a pregnancy or how reproductive organs work. More than anything, sex is about pleasure. After all, the clitoris is the only organ in the human body that exists solely for pleasure. But women especially are stigmatised and shamed for putting pleasure before reproduction. Unsurprisingly, there are few studies on women’s pleasure versus men’s pleasure. And there are even fewer studies about the health conditions that lead women to feel a sense of discomfort or outright pain during penetrative sex. If we educated each other about how pleasure is an integral part of sex, then we could take away some stigma and pain too.

11. We should not be ashamed of our sexuality

There is a twist in the third season, with a school principal who appears progressive who starts shaming students to keep them under control. She also cancels regular sex education classes and reverts to old-school lessons about abstinence. Luckily the students fight back and other adults support them in pushing the idea of the school as a safe space to talk about relationships and sexuality. I myself wish that the adults around me when I was growing up had created a safe space to talk about sexuality rather than setting restrictions and taboos in place. I wish i had had more role models and felt less shame.

12. Vulvas come in many shapes and sizes

Ruby is desperate because an image of her vulva gets shared across the school. But when the school principal brings this up in an assembly, many girls stand up saying: “It’s my vagina!”. Of course they should be shouting “It’s my vulva!” – but the point is that they cover for their peer and reinforce the idea that there are no ugly or beautiful vulvas. In fact, if you want to get some sense of just how wildly different vulvas really are, just have a look at The Vulva Gallery by Dutch artist Hilde Atalanta, which is what Jean Milburn suggests Aimee to check out when she is feeling insecure about what her vulva looks like. (Aimee gets such a kick out of it that she starts baking vulva-shaped cupcakes to educate her peers about diversity!)

The third season explores the relationship between Maeve and Isaac, who is on a wheelchair after an injury that left him paraplegic. Seeing their relationship taught me a lot. There is not an inch of pity in how Maeve approaches Isaac and helps him undress and asks him what he can feel. There is candour and normality that is not usual in the representation of characters with disability. But there is something else: when Maeve doubts about the relationship, Isaac is very frank. “I need to be with someone who’s sure about me because I think I deserve that. So with respect, I’m taking my heart off the table,” he says. Isaac gives a lesson in self-worth that is reinforced by many other characters. Cal, for example, tells Jackson they are not ready to continue the relationship if he is uncertain about it: “There’s so much shit I don’t know about myself yet, I can’t carry you too.”

The series shows that it’s not just adolescents who need plenty of sex therapy: adults need it too. Our ways of understanding sexuality evolve as a society, making it necessary for us to constantly educate ourselves about it. For example, we have recently started talking about a much wider spectrum of sexual identities than before. We’re now hearing more about terms such as demisexual, pansexual or sapiosexual. And every moment in time comes with unique challenges. For instance, what is sex like when you get older? And what happens if sex becomes a way to conceive – but you can’t get pregnant? Sex ed should be there to stay.

Over to you now. Have you watched the series? If so, what are the lessons you learnt? And if you haven’t watched it, I’d love to hear about your experience with sex education when you were growing up. Leave a message under this story to share your thoughts.

Also, thanks to all of you for your messages after last week’s story about my second miscarriage. If you’re a member, you can see what Nabeelah and Yoshie have been sharing – it is brave of them. I’ll come back to writing about pregnancy loss soon, but in the meantime you can see their messages here.