In Greece, migrant children have the right to go to school 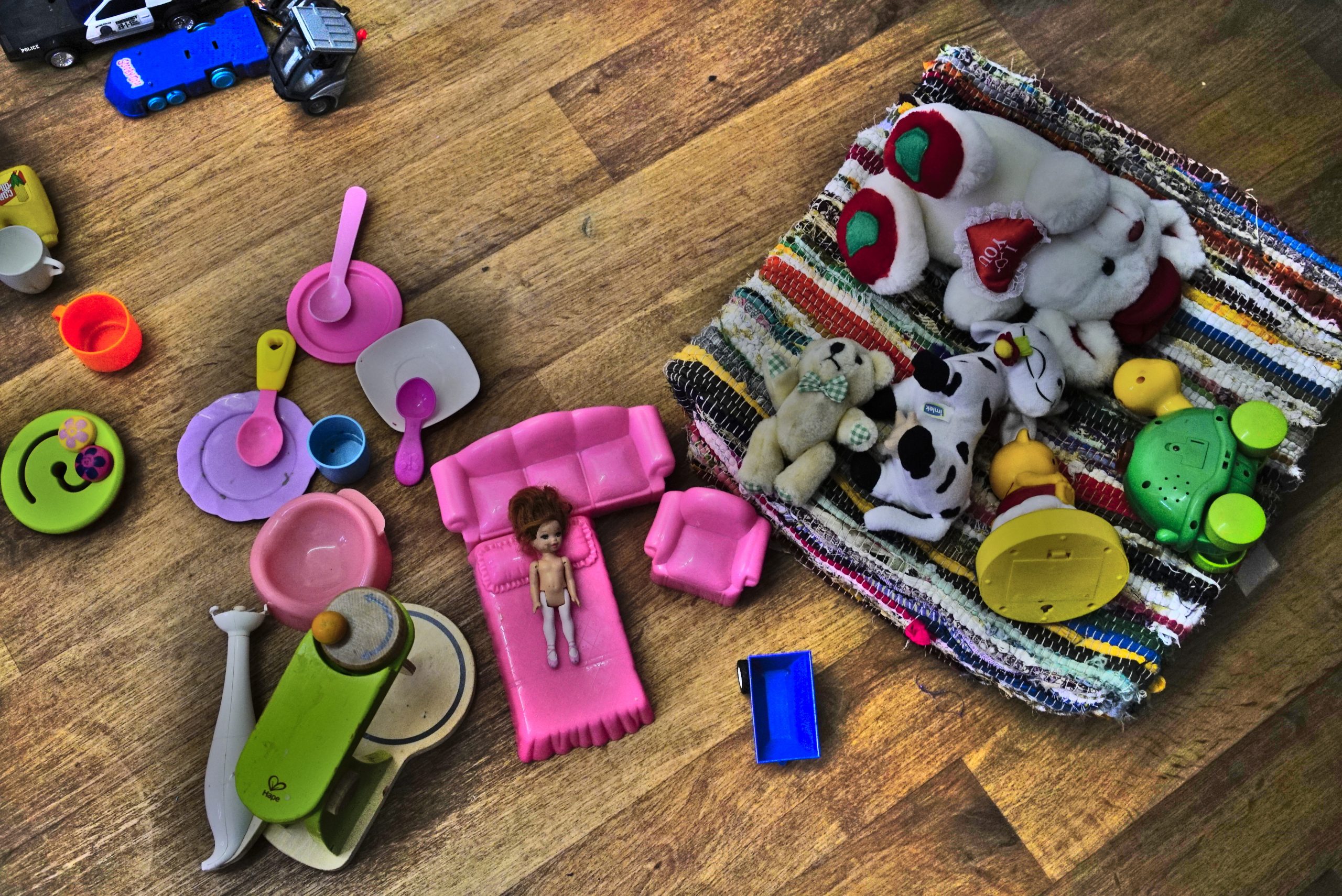 This is Marianna Liakou, a Greek kindergarten teacher I learned about thanks to the work of journalist Nikolia Apostolou, who is a member of this community, and who spoke to us for this week’s edition over email. A disclaimer: Nikolia’s work was possible thanks to the support of the Early Childhood Fellowship at the Dart Center for Journalism and Trauma, where I worked as a story coach, as I’ve told you before.

Amidst a jungle of warehouses and speeding trucks in Athens, Liakou is doing her best to provide for her preschoolers. Other than showing them how to hold a pencil correctly or to play together, she teaches them mindfulness. When a student gets upset she uses a scalp massager to help them relax, or a glitter jar to encourage them to regain focus.

This group is extraordinary. The class is in a container inside Eleonas, a refugee camp in Athens. The children arrived in Europe with their families after an arduous journey. They are young, and they are still feeling the impact of crossing the sea in a dinghy to reach Greece from Turkey.

In addition, the children here are also feeling the impact of the change of the European Union’s migration policy. Things have gradually become harder for migrants: in Greece, it takes months to book an interview with the asylum services. Even if a family gets refugee status, the housing provided lasts only a few months, not enough to get adjusted to a society with a youth unemployment rate of 37%, and certainly not during a pandemic. In an attempt to reach Western Europe, where many have relatives, many families are forced to split up as one of the parents is smuggled to Germany or the Netherlands, leaving children feeling abandoned.

Liakou’s goal is to prepare these children for Greek public kindergarten. But, despite her work, many of the refugee children fall through bureaucratic cracks and aren’t enrolled in elementary school at all. Four out of 10 children between the ages of 5 and 17 weren’t enrolled in school in Greece, according to a UNHCR report on refugee children’s education based on 2018 data. Sixteen and 17-year-olds had the worst enrollment rate, with only four out of 10 enrolled, while only one out of 10 children living on the Greek islands was enrolled. Covid-19 only worsened the situation, though the data on school enrollment is sketchy.

Irene: Nikolia, thanks for giving us the background to this story you reported on. It paints a bleak picture for these migrant children. But the photos you shared of Liakou and her work also show playful, fun moments. Tell us about the project she’s a part of.

Nikolia: These kids are facing multiple daily problems. They’ve not only been traumatised from the journey from their country — usually Afghanistan or Iran — to Europe, but so have their parents. The parents often deal with depression, substance abuse, and have to provide for their families without a job and with little or often no government support. Naturally, kids feel in their skin what their parents have to deal with.

The programme was developed by the Refugee Trauma Initiative (RTI), an NGO that started in Thessaloniki in 2016, after the big wave of refugees arriving in 2015. RTI partnered with the Greek NGO, ELIX, where Liakou was working. They created the first Baytna Hub, in the refugee camp, offering a safe and creative space for preschoolers. Baytna (“Our Home” in Arabic) Early Childhood Care is a programme aimed at preschool children, in which it provides safe and creative spaces that manage their traumatic experiences as well as support their personal development through games, learning and socialising.

Irene: I’m interested in hearing more about the mindfulness part of the class. What did you observe?

Nikolia: One of the toddlers attending the class, Rasha (a pseudonym, to protect her identity), was dealing with several traumas. According to her drawings, she remembered the boat ride to Greece as a difficult experience even though she was just one year old. Her mother had taken her baby sister and left her and her father behind to reach Germany in the hope that the family would be able to reunite afterwards, but her father was dealing with his alcoholism and depression and the child wandered around the camp alone in the hours that she wasn’t in school. After her mother left, Liakou remembers that Rasha stopped smiling and laughing. Liakou referred her to the camp’s psychologist. The mindfulness practice helps many children like Rasha relax and refocus in a classroom setting.

Irene: You’ve reported for years on refugees in Greece, with a special focus on children. What are the things that you’ve observed throughout the years that you think are the biggest obstacles, and what gives you most hope?

Nikolia: By law, all children living in Greece — no matter their refugee status — have the right to go to school. Unfortunately, the government isn’t doing much to support these children, as preparatory Greek classes exist in very few schools. In addition, parents often don’t know that their children have the right to attend school, don’t know how to enroll, or in some cases have been turned down by school officials who aren’t keen on having refugee children attend. There are also the families that hope they’ll continue their journey to Western Europe, so they don’t bother sending their kids to school. The barriers are quite low — especially for early education — but despite that, children are still kept away from preschool.

Children make up half of the world’s migrant and refugee population. In Europe, children represent a third of overall migrants, but 60% of them are unaccompanied or separated from their families. Education could play a major role in integrating them in society, but there are many barriers that are not easily overcome. During the Covid-19 crisis, many things worsened, but there are still small projects that try to make a difference.

Talking about migrant children, there is an event tomorrow that I’d like to flag. Thousands of migrant children go missing after arriving in Europe, and one project, Lost in Europe, is keeping track of some of their stories. Their first exhibition will open in Brussels tomorrow, 18 November, and you can attend remotely too.

**
Nikolia will be available to answer any questions directly. As usual, you can leave a message below this article on the website, or hit reply. (Remember that only paying members have access to the comment section.)

Does having children make you happier? According to US psychologist Paul Bloom, the research is inconclusive, and social scientists have gone back and forth on the issue for decades. Bloom quotes a 2016 paper that showed that parental happiness depended on child-care policies. For example, parents were happier than childless couples in countries like Norway, while in the United States they experienced the greatest happiness drop after having children. Bloom puts his finger on a core idea related to parental happiness: “When I say that raising my sons is the best thing I’ve ever done, I’m not saying that they gave me pleasure in any simple day-to-day sense, and I’m not saying that they were good for my marriage. I’m talking about something deeper, having to do with satisfaction, purpose, and meaning. It’s not just me. When you ask people about their life’s meaning and purpose, parents say that their lives have more meaning than those of nonparents.” I’d love to hear your thoughts about this, whether you’re a parent or not. Thanks to Deanna, a member of this community, for flagging this piece.

Months ago, Amelia, a member of this community, shared the link to one of her favourite podcasts — an episode of This American Life dedicated to the idea of delight. The episode is an exploration of what exactly delight is, how it feels, and when we feel it. British reporter Bim Adewunmi looks at her own discovery of delight when she was growing up and interviews the US poet Ross Gay who “studies joy”. The second ‘act’ of the show is dedicated to a child’s delight — but overall the podcast talks about delights of all kinds and shapes, and those that go well beyond childhood. Thanks to Amélie for the recommendation.

This short video — 9 Ways to Draw a Person — is a gem I found in Aeon’s Psyche magazine where Russian animator Sasha Svirsky reflects on the idea of creativity and perspective. Given my recent exploration of drawing, and how much I want to experiment together with my son Lorenzo, I thought that this short video was a good way to think outside the box and consider our own limits when asking: How would you draw a person? Warning: the film features rapidly flashing images that can be distressing to photosensitive viewers.

This high school history teacher in Argentina held a baby throughout classes and exams so that a young mother could get her work done. Ludmila Disante, the student, paid tribute to him in a touching Facebook message: “All schools should have teachers like this so that all young mothers who want to finish their studies can.” Argentina has high rates of teen pregnancy, with 14% of the country’s births happening to teenagers aged between 10 and 19. Of these teenage pregnancies, 70% were not planned.

In response to last week’s newsletter about how to avoid bossing children around, a few people said they were keen to try the experiment among adults too. On Twitter, Ben said: “Today’s @irenecaselli newsletter (subscribe!) about moving from commands to information when talking to children feels relevant to, dare I say, newsroom culture too.” In the comment section below the piece, Joram said he had shared the masking tape experiment with colleagues at his lab, and was keen “to try it with many colleagues at once and share our results after a teaching day or supervising students in the lab.” Joram also used the notification feature on the comment and got an email as soon as I responded! Small steps towards creating a better-functioning community section!

📣 Nabeelah Shabbir, a member of this community and a friend, edited and improved this week’s newsletter with lots of love, logging in from Cerknica, Slovenia. Thanks, Nabeelah! (If there are mistakes, they are my fault, not hers!)