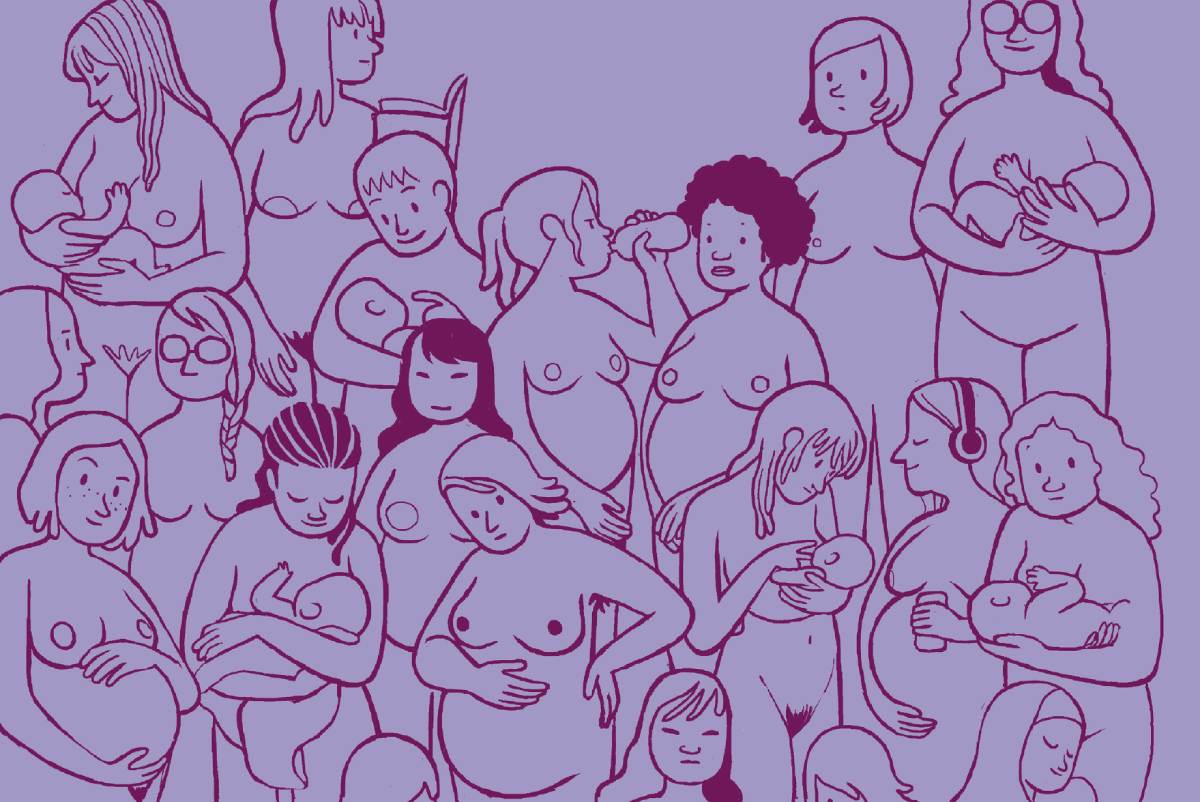 **Warning: this piece handles obstetric violence, and goes into some graphic details. If this has affected you and you have not received support, feel free to send me an email and I will try and help you find the right resources in your country.
Images: Courtesy La Revue Dessinée Italia – Rita Petruccioli

I had the good fortune of reconnecting with my best friend from kindergarten, Laura, at a very unfortunate time — during COVID, when she had her first pregnancy. During and after the birth, she experienced obstetric violence, or abuse during childbirth.

This traumatic image was painfully far from how I remembered Laura. Back in kindergarten, she wore thick glasses, was very funny and had an excellent ability to draw. It felt like we spent all our time together. We would make comics together, with narratives that ranged from romantic tales to the lives of potatoes. She would draw and I would write.

When primary school was over, we went separate ways, and I missed her so much in my middle school. We lost touch for many years, but then she became an accomplished actress and my mother would go see her theatre shows in Naples.

So I got to see her again at a show years ago, and then she contacted me again a couple of years ago when she was pregnant.

It was COVID times and this was her first pregnancy. She had seen that I wrote about the first 1,000 days, so we started exchanging long WhatsApp audio messages about her doubts, worries and ideas. We became close again, at a distance.

The time of her birth arrived, and she had an awful experience. She had a C-section, and her partner was not allowed with her in the hospital throughout the three days she had to stay there. The hospital staff removed the child from her and did not let her see him except for a couple of hours a day. She was keen on breastfeeding, but they told her that she did not have “breastfeeding breasts” — whatever that means because it is definitely not a comment based on scientific research, I can tell you. The hospital staff also never changed her night-gown, which was dirty with blood.

Laura sent me a first audio message from the hospital, and she was truly miserable. I replied saying that she had the right to have her son next to her, but I did not push her too much because I did not want to upset her with my theoretical knowledge of what hospitals should be doing.

I then heard back from her when she was back home, struggling to be with her son, who would never stop crying.

Thankfully, she got the support of midwives that are part of a state-run project called The First 1,000 Days, which operates in the province of Naples and puts emphasis on assisting parents in a child’s first 1,000 days of life. Midwives visited her and — after realising how much she was struggling — suggested a “rebonding” ritual that simulated her birth experience.

The midwives practically immersed Francesco, her baby, in a plastic basin with lukewarm water, and then put him naked on Laura’s naked body. Francesco recognised his mother, which helped her reset her relationship with Francesco.

The midwives also explained to Laura that what hospital staff had put her through amounted to obstetric violence, an issue I’ve written about before. For those who haven’t read that piece, I explain that obstetric violence is the violation of pregnant women and other people that comes from neglect, physical abuse and/or lack of respect during pregnancy or childbirth.

I wrote about Laura and obstetric violence for La Revue Dessinée Italia, Italy’s first magazine that does journalism in comics, and the experience was amazing, because my writing was transformed into a comic by Rita Petruccioli, a talented illustrator with a particular eye for women’s stories.

The magazine has just reached my house, and Laura’s too. “I think about comics and think about the comics we drew 35 years ago,” I wrote to her. She cried. “I think that every time I read the story I will cry,” she told me. “After all these years, it was you who made a comic for me.”

If you read Italian, you can find the magazine here. It is a beautiful independent, ad-free, reader-funded project, so consider subscribing! In the meantime, you can see some of Rita Petruccioli’s drawings here.

This is a beautiful article in Romper in which Canadian writer Michelle Cyca explains how she is learning to speak her grandmother’s indigenous language, nêhiyawêwin, thanks to the many children’s books by Indigenous writers and illustrators that she is reading with her toddler. While her grandmother was forced to speak English at a residential school, new possibilities are now coming up for Indigenous people trying to recover their languages and their beautiful words. For example, the word for moon in nêhiyawêwin, tipiski-pîsim, translates to “nighttime sun.” There are lots of tips for beautiful, enriching books in the article. The piece also comes with a warning not to buy them just to be cool, open-minded parents, but to really be able to reflect on the diversity. (By the way, I’ve written about the importance of diversity in children’s books here, in case you missed it.)

I got hooked on the coming-of-age Netflix series Never Have I Ever, in which Devi Vishwakumar, a second-generation South Indian teenager, takes us through her final years at high school as she faces some really difficult challenges. She is funny and smart, but also self-centred, stubborn and often annoying, making her character well-rounded and believable. I loved getting lost in the school’s stories that defy national and sexual stereotypes. Much like Sex Education, I wish these shows had been around when I was growing up!

New Yorker cartoonist Liana Finck’s sketches always make me reflect on something deep connected to motherhood and life more broadly. But this one cartoon she drew for Mother Tongue magazine is something else. “What am I forgetting?” asks a mother as she pushes a stroller, with a dog on the leash, after going through a long list of items (which include existential dread and climate anxiety). “Oh yes. Myself.” Thanks to Marius, a member of The First 1,000 Days community, for sharing.

Thanks to Patricia, a member of The First 1,000 Days community, who wrote a really interesting email about stillbirths and COVID vaccines — I promise to look into it and address it further. She also shared something in reaction to my recent article about the invisible load. “I once made a three-page list for my partner to show all the little bits here and there that I did but he didn’t see. Turns out he was convinced that the dishwasher filter cleaned itself 😜 and he hadn’t noticed that I give it a scrub every month (at least). He also didn’t consider making a grocery list a task because he figured we just think about it in the store and that just magically appears without putting effort or time into looking at what we still had, what we don’t have, etc.” I am curious to hear if anyone else among you readers has compiled such a list. Please feel free to share below the story.