We don’t know how children actually see the world 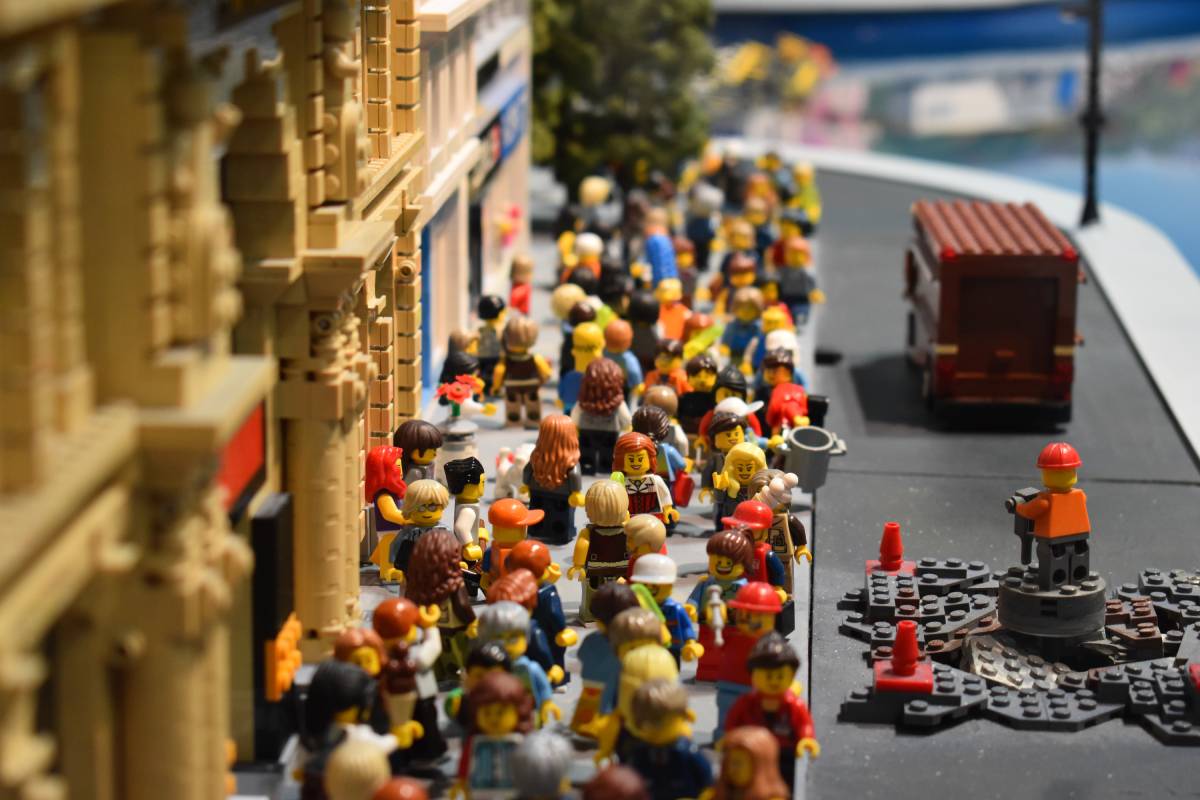 Something terrible has happened to Baidui, my son Lorenzo’s imaginary friend.

He was a child, but also an uncle. A boy but also an airline pilot, so tall he could touch the sky. But he wasn’t always the nicest person. When he got angry, he would hit other children. Like a lot of imaginary friends, he was a complex, well-rounded individual.

Well, I’m sad to report that Baidui has died. It is uncertain what exactly happened, but Lorenzo said he was behaving really badly, that he was not listening, and that he died as a result. “Was he run over by a car?” we asked. But Lorenzo stayed tight-lipped.

What is clear is that Lorenzo’s newer imaginary friend Bandó is now everywhere. He appeared later than Baidui, and distinguished himself by being incredibly well-behaved. He had all of Baidui’s qualities (extra tall, ate a lot of protein so that he could play basketball), but none of Baidui’s defects. Above all, he was always nice to other people and never acted out in anger.

We asked Lorenzo whether he was sad that Baidui had died, but he said he wasn’t. He had Bandó now, and Baidui was “muy muy malo” (very very bad). Was he trying to prove that he can overcome his naughty side by killing Baidui off? Maybe unconsciously.

It is difficult to capture fragments of childhood, to retain turns of phrases or zero in on the specific worldview we had as children growing up, just as it is difficult to keep up with our own children as they grow up and change constantly.

Children’s views are drowned out by our adult view of the world, and our memories don’t go as far back in our past. We simply don’t retain so much of what happened before we became adults. But if how children see the world is ignored by us adults, we miss out on important perspectives. Children are by nature more instinctive and less fearful (their brains are not fully developed yet), and they are closer to the environment. All of these are things that can help us overcome the most pressing issues of our time, like the current climate crisis, for example.

Getting closer to how children view the world

This is why I am trying to get more voices of children in this newsletter — something I hope to do through my LEDE fellowship with the Solutions Journalism Network, as I announced at the beginning of the year.

The idea is that I am looking for children who have found solutions to the problems they faced, and to talk to them as they are doing it. Not when they are adults, already well-known, and have possibly forgotten exactly how they overcame these problems. I want to gather these stories from around the world because I want to give a platform to under-18s and make sure we can get a little closer to how children view the world from their own perspective.

By the way, if you have ideas of children who are doing interesting things in your part of the world, please send them my way. I aim to publish three such stories by the end of 2022, both in this newsletter and in other publications, collaborating with journalists from other parts of the world.

In the meantime, I am falling back on literature to capture fragments of different childhoods.

Recently, on a sleepless night, I devoured I pesci non chiudono gli occhi (Fish don’t close their eyes), an autobiographical story by Neapolitan writer Erri de Luca about a summer when he was 10 years old. The book captures with great detail that time when our minds are growing, and our bodies are lagging behind, still caught in their child-like shape.

De Luca writes: “At the age of ten you are in an envelope, one holding the shapes you will become in the future. You look out into the world thinking you are an adult, but your feet are squashed in your size-too-small shoes. Childhood survives in your voice and the toys you have neglected but haven’t yet thrown away.”

Books through the eyes of a child

I recognised myself in the child’s desire to read adult books and to understand how they function and what makes them tick.

It is a similar feeling that I got by reading another coming-of-age novel, Vozdevieja (Oldladyvoice), by Spanish writer Elisa Victoria. This is the story of Marina, a fierce nine year old spending the summer with her grandmother in the heat of Spain’s south, as Marina’s mother is in hospital with a serious but unnamed illness. Marina is hilarious and strange; she feels out of place with many children but is also desperate for their company. She learns about sex and violence by secretly reading comics she finds in her house, and can’t wait to grow up and experience life herself.

As Charlotte Whittle, the book English translator, says: “Marina reminds us that the mind of a child is far more subtle and complex than is usually acknowledged, and the book’s warmth and humor combines with Marina’s fears and anxieties to create a rich portrait of a girl whose resilience and vulnerability can’t fail to move the reader.”

Over to you now. I would love to hear about fiction with children’s voices you’ve read and loved. If they are younger children, even better! Please hit reply or become a paying member to leave a comment below this story.

With this week’s leak on the decision to overturn Roe vs. Wade in the U.S., the debate over abortion and reproductive rights back high on the agenda. Here’s a look back at how abortion rights were hard won in Argentina. It’s a story I wrote as the Argentine Congress debated legalising abortion in 2020. And if you’re wondering why the right to abortion is part of my reporting on the first 1,000 days of life, I explained the reason in this newsletter.

This is a beautiful short story by OluTimehin Kukoyi, a colleague from my time at the now-defunct The Correspondent, and a writer I admire hugely. Told in the first person from the perspective of a mother, this story touches on the ideas of fatherhood (who can consider himself a father?) and who gets to decide another adult’s presence in the lives of the children they carried. “Everybody knows: the father of the child is the one under whose roof it is named. Who the mother has been naked with is a minor detail generally taken for granted or, if she is careless, whispered about. But whispers don’t change a surname,” says the story’s main character. A great reminder of how powerful fiction is and how much we need it to reflect on our world.

This episode of Kerning Cultures, a podcast with stories from the Middle East and North Africa, tells the love story between Butros and Lynn. He is Lebanese; she is his uncle’s Filipino housekeeper, and an outsider in Lebanon. The podcast goes into how the children born out of their marriage are treated as outsiders too, and how they try to turn their back on their mother’s origins. “I don’t love you,” Amanda tells her mother, who says she stopped talking to their children in her native language, Tagalog, because her mother-in-law told her the children don’t need anything from the Philippines. A great insight into what it means not to have the privilege to raise bicultural children.

I finally (finally!) got to watch Howl’s Moving Castle, the 2004 Studio Ghibli fantasy animation based on the novel by the same name by British author Diana Wynne Jones. I must admit that I binged the book (and its sequels) over Christmas, and they were perfect companions to try to disconnect from work and the news. The film exceeded my expectations. I loved how it highlighted a critique of war that is less visible in the book and gave it a big presence with the use of violent, dark images. I won’t tell you much about the storyline, except that it includes wizards, witches, a flying castle (obviously!), love and evil.

This story in The New Yorker looks briefly at the Black feminist movement in the U.S., and the role it played in the wider debate about reproductive rights and abortion in particular. It addresses the work of Frances Beal, a single mother of two children, who in 1969 wrote a pioneering document titled “Double Jeopardy: To Be Black and Female.” As she puts it, referring to the “double burden” Black women have to face: “It is idle dreaming to think of black women simply caring for their homes and children like the middle-class white model. Most black women have to work to help house, feed, and clothe their families.” What Beal and other Black feminists pointed out is that rich (white) women always had a lot more choices when it came to reproductive rights and ending a pregnancy, for example. It is mainly working-class people and those living in poverty who are affected by restrictive laws on reproductive rights. In the U.S., for example, three-quarters of abortion patients qualified as low-income or living in poverty, according to the Guttmacher Institute, with Black and brown patients accounting for more than half of all abortions performed. This is an important read, especially in the light in what transpired this week regarding the likely overturning of the Roe v. Wade decision that guarantees the right to abortion in the United States.

A few members have recently asked me whether they could contribute financially to my work without becoming members of The First 1,000 Days. Would it be possible to send donations over, they asked. They mentioned Apple Pay and PayPal as possibilities. I want to first of all thank you for bringing this up, but I also want to clarify that I need to check this with my accountant to figure out how to manage it from a financial perspective. I hope to be able to get back to you as soon as possible. In the meantime, if you’re curious, you can check out the perks of becoming a full-paying member here. Thank you!

📣 The First 1,000 Days is edited by community member and friend, Shaun Lavelle, who has been binging Heartstopper, a gorgeous coming-of-age LGBTQ+ drama on Netflix. Watch it if you haven’t already, and be prepared to laugh and cry.